Are you expecting to add a Labradoodle to your family soon? You obviously need to know what you’re in for. This guide should take you through what to expect when feeding Labradoodles, Labradoodle behavior, and Labradoodle features during different age milestones.

Feeding Labradoodles at this stage would mean that you’d be giving them anywhere between 100 grams of food to 200 grams of food.. It really depends on their body weight. If you believe your puppy is on the chunkier side, it may need more food than usual and vice versa.

At around eight weeks old, your puppy is going to be very playful, and they’ll want to get into everything. About ten weeks old is a great time to train them to get their Labradoodle behavior under control. As they get older, they’ll get more independent and follow you around.

At this milestone, your Labradoodle puppy is just going to be a tiny ball of fur. They’re going to blend in with your carpets and camouflage themselves pretty easily. Their Labradoodle features are very prominent even as puppies which makes them a very adorable breed.

At the adolescence stage, a Labradoodle is going to need the most food quantity in their lifetime as this is when they face the biggest growth. Ideally, it does still depend on their weight and size, but you would want to stick to feeding Labradoodles a bit larger, like perhaps 300-400 grams.

At this stage, your Labradoodle puppy is going to be sleeping and eating for the majority of the time. Labradoodle behavior should be calm and predictable. They should be housebroken and passed their biting phase. They will start to show strength and confidence.

The Adolescence stage is when you’re going to finally see what they’re going to look like for potentially their entire lives. Labradoodle features are the most prominent here, and you’re going to see just how much hair they truly have. Spoiler alert, it’s going to be a lot!

Depending on what type of Labradoodle you have, the Labradoodle behavior you can expect during this stage is one that is more so calm and collected. They’re going to be less interested in toys and more interested in meeting new people and exploring new places and surroundings.

At this stage, you shouldn’t notice any visible changes to the physical features of your Labradoodle. Labradoodle features may change if you’re unable to control their food intake, which will make them chunkier, or you may see growth sideways rather than upwards.

Middle age is when a Labradoodle is anywhere between six years old to about ten years old. At this stage, Labradoodles are still pretty healthy, but they do tend to slow down and keep to themselves and their comfy beds. Here is all you need to know about middle age Labradoodles:

This is another period where you need to watch your Labradoodle feeding ritual to make sure that you aren’t overfeeding them. While Labradoodles at this stage usually don’t eat more than they need, it is still important to make sure that they maintain a healthy physique throughout.

Labradoodle behavior is very important to keep an eye on at this stage. This is because this stage is when their joints start to become stiffer, and they’re going to need a little extra support through supplements and multivitamins to keep their joints strong and functioning.

When your Labradoodle finally hits the ten-year mark, they are officially considered a senior in the Labradoodle community. They definitely need to be commended for surviving with you for this long! Here is all you need to know about senior Labradoodles and what they need:

Feeding Labradoodles when they finally hit the senior milestone can be a bit tricky. They’re often not interested in food and tend to remain on the lazier side. While this isn’t an issue for the most part, just make sure that they don’t start to lose weight rapidly as that could be a problem.

As you can probably guess, Labradoodle’s behavior during the senior age milestone consists mainly of lazing around. They aren’t interested in most things and prefer to just lay on the couch and watch TV. There also going to need more extra support than usual when moving around.

The Labradoodle features that give away that they’re a senior are definitely their face and legs. Their face is going to look old and tired, and their legs are going to look weak and fragile. They’re probably going to be suffering from joint pain and need some extra help moving around.

Labradoodles are definitely one of the cutest types of dogs to own. However, like any dog, they require your full attention and support throughout their lives. This guide should give you a pretty good understanding of what to expect during each of their age milestones. 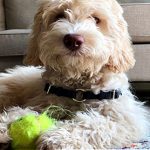 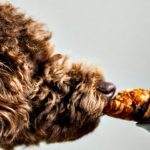