One of the reasons why dogs make good pets are because they help with loneliness. … Dogs love being around their owners and love to please them. You’ll always have your dog to cuddle with, eat dinner with, or head to a dog-friendly bar. You’ll discover quickly that your dog will become your most loyal friend. Unconditional love. Devoted companionship. Constant entertainment. Most of us dog lovers already know why life is better with a dog. But is that knowledge based on just a feeling in our hearts – or is there something else at work? Yes, in fact, there is: Science. Recent research about the canine-human relationship shows that owning a dog is actually good for you on both physical and emotional levels. If you ever needed convincing that there are benefits from having a dog, here’s all the proof you need:

Dogs relieve stress. Playing with a dog or even just petting a familiar dog lowers blood pressure and heart rate, slows breathing, and relaxes muscle tension almost immediately. That study is backed up by more recent ones that show a reduced level of stress hormones in blood chemistry, even in people who are candidates for blood pressure medication.

Dogs are good for your heart. Published research about a study of 369 heart attack patients one year after they were released from the hospital. One year later, pet owners had a much higher rate of survival than non-pet owners. The research concluded that the bond between humans and dogs reduces stress, which is a major cause of cardiovascular problems.

Dogs make us happy. In fact, even just looking at a dog can make you happier. A study in Japan in 2009 found that just staring into your dog’s eyes raises your level of oxytocin, also known as the “love hormone.” Other studies have shown that owning a dog can alleviate depression, and this is especially true for older adults. As social ties loosen and family members live farther apart from each other, seniors are at risk of becoming isolated and lonely, which is a cause of depression. Research studied people 60 years and older who didn’t live with a human companion, but had a pet. Their likelihood of being diagnosed with depression was one-quarter as likely as non-pet owners.

Dogs make us more social. Think about how often you stop to talk to other people when out with your dog, whether they’re your neighbors or new friends at the dog park. A study at the Cummings School of Veterinary Medicine at Tufts University concluded that people who have a strong attachment to a pet report that they feel more connected in their human relationships and their communities. The study also concluded that teenagers and young adults who grow up with a dog become more confident and empathetic.Dogs keep you in good shape. Want to drop a few pounds? Grab Fido and get hoofing. Research has repeatedly found that daily dog walks help you lose weight, since they force you to into moderate physical activity for 10, 20, and even 30 minutes at a time. In fact, in 2010, one small study discovered public housing residents who walked “loaner” dogs five times a week lost an average of 14.4 pounds over the course of a year. The best part: Participants considered it a responsibility to the dog, rather than exercise. (”They need us to walk them.”)

A dog’s sense of smell can keep you healthy. Dogs can be trained to detect prostate cancer, according to a recent study. They can also help you avoid foods you’re allergic to. Several places in the United States train dogs to sniff out the slightest trace of peanuts in the room. With so many children suffering from severe peanut allergies, this ability can be a godsend to their families. Dogs can also be trained to alert diabetics to a low blood sugar level.

Dogs make us want to take care of them. There must be a reason why so many people become virtually addicted to dog videos, and why puppies are so irresistible. Konrad Lorenz, a 20th-century Austrian zoologist, posited that a dog’s face possesses an “infant schema”: In other words, because a dog’s facial features are “social releasers,” it triggers an innate caregiver response in humans.

Bottom line: Even though most people think that we’re the ones taking care of our dogs, it’s actually mutual: They take care of us as well, and there’s real science to back it up. 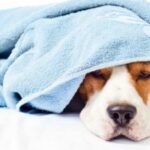